Bharat, Hindustan, and, of course, India. During Easter together with my wife Vita I spent ten days in India as guest of the Indian Council for Cultural Relations (ICCR). As the chairman of the Latvian – Indian Interparliamentary Group in the Latvian parliament (Saeima) I was able to gain insights into a fantastic country’s politics, culture, history, science and not only that. 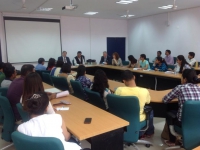 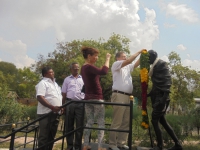 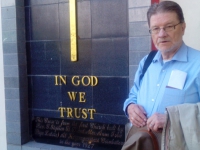 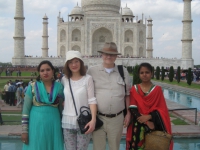 I have several ties with India – beginning with the organizing and chairing of the India parliamentary group in the Saeima during three Saeima sittings starting in 2010, promoting the establishment of the Latvian embassy in India, and the Latvian-Indian Consultative Council here in Riga, not to mention that the legendary Latvian missionary in India Anna Irbe is a close relative of mine. Her resting place is in southern India, where she died in 1973 after beginning her mission in the 1920’s.

Earlier this year in February our former president Madame Vaira Vīķe-Freiberga also visited India as did the State Secretary of the Latvian MFA Mr. Andrejs Pildegovičs.

Before we dwell into deeper matters I would like to mention the journey itself – we covered a very great distance! Our itinary started and ended in Delhi. In between we visited Agra, Madurai, Wellington/Ooty, Coimbatore, Bengaluru. Memories of these destinations will live with us for a long time. We saw cultural and historic sites, including very impressive temples.

We also met and became friends with wonderful people, including the staff of the ICCR, whose work I would rate as 11 on a scale of 1-10. Special thanks goes to the Director General of the ICCR Mr. Satish C. Mehta.

We arrived in India bringing with us good, i.e., cool weather as jokingly was pointed out to us by our host. The temperature was only 28 degrees centigrade from the usual 40. Just before we arrived India was visited by unseasonal heavy rains bringing about extensive crop damage and, accordingly, calling forth government aid to cover losses to the farmers. A familiar enough theme in Latvia also.

It was only after we returned from the south did the temperature climb to the normal of 40 – 41 degrees in Delhi. For a European this is a bit hard to cope with. Even the locals were not very enthusiastic about it either. But this made us all the more appreciative of Latvia’s cool climate and we were happy to land back at the Riga airport where it was a bit below ten.

During our visit I gave a lecture on the Latvian Presidency of the Council of the European Union at the Jawaharlal Nehru University’s Centre of European Studies run by Professor Gulshan Sachdeva, who has been in Riga already on two occasions. I am also grateful for the fruitful discussion with the Vice-President Nandan Unnikrishnan of the Observer Research Foundation (ORF).

Later we visited the Mahatma Gandhi Memorial Museum in Madurai headed by K.R. Nanda Rao (in the enclosed photo attachment I can be seen placing a garland around his statue). It turned out that I was the first Latvian to visit the museum and left with a note of thanks in the visitors’ book in both Latvian and English.

I was intrigued by the disappearence of one of the leaders of the National Congress Raul Gandhi. This was one of the main talking points in India and it reminded me of Putin’s recent disappearance. As I was writing this article first in Latvian I heard on the BBC radio that Mr Gandhi has returned and is ready to restart in politics.

It must be noted that I gleaned much information from India’s English language newspapers and magazines. Next to Hindi, English is an official language in Delhi. This is not about one or two papers that offer information about India to tourists, but rather a full-blooded English press in its own right about all things Indian representing various political strands in society.

For example I read about a controversy that two states that had forbidden the eating of meat of any kind. An opinion was offered that this discriminated against the poorer sections of society since meat was their main source of protein, and that, in fact, this was contrary to the Indian constitution. Would tourists also be effected?

A bigger issue in the press was the campaign by the right-wing of the ruling BJP party to bring about the conversion of Moslems and Christians to Hinduism. This has created a stir, and it was pointed out by journalists that Christians make up only slightly more than 2% of the whole population, while Hindus a full 80%. I was surprised to learn that Christianity arrived in India well before it found its way to Europe!

Front page news was that the activities of “Greenpeace” had been suspended. The alleged reason was that “Greenpeace” opposed India’s development, which is somewhat puzzling to me, since I have not observed that it has hindered the development of any one state.

On the whole big changes are taking place in India today both in politics and economics. It behooves us to take note of this for one simple reason: already in 2030 India will become the third largest economy in the world. Narendra Modi, who became the prime minister a year ago, has defined India’s geopolitical choice as basically coming closer to the West. Although he is now being criticized now for not living up to the expectations of the people after his landslide election victory, it can be clearly seen that his ambition is to modernize the state economy. Possibly, the criticisms will give him an added stimulus.

It was while I was in India Narendra Modi departed for Europe and Canada. His first visit was to Paris, where he met the French president and signed a deal for the purchase of 36 “Rafale” jet fighters. The deal includes that more of these fighters will be made in India; the military industrial sector of India plays an important part in the Indian economy. Due to historical reasons the armed forces of India are still heavily dependent on Russia for arms. However, the plan is to lessen this dependency below 50% in the coming years.

Here I would like to mention the visit to India earlier this year in January by President Barack Obama, when he was honoured to sit in the ceremonial chair while viewing the military parade on India’s Constitution Day. He was the first American president to do so and such an honour carries tremendous symbolic value. It demonstrates that India, in effect, see’s its security anchored in the West.

Modi also talked with the French about the modernization and development of atomic energy in India, and the building of “smart cities” in his country. After Paris, he went on to Hannover, where, together with Chancellor Angela Merkel he the world’s leading industrial and technological trade fair. From Europe he flew on to Canada. Both these countries are presently negotiating a free trade agreement (the EU has concluded talks with Canada on a FTA, while talks with India have stalled). In addition Canada is ready to deliver uranium to India’s atomic power stations.

These visits and their scope clearly demonstrate India’s political choice and ambitions.

India supports the framework agreement with Iran. If a final agreement can be reached it would give a significant boost to Indian growth. As the press wrote it would open up new transit routes and hubs for India. Already India, together with Iran, is developing the Chabahar deep water harbour, which could serve as a hub for Indian trade with Afghanistan and further on with Central Asia circumventing Pakistan.

While still in India I witnessed the explosive effect of the release from jail of the mastermind behind the terrorist attack on Mumbai in 2008, Zaki-ur-Rehman Lakhi, that left 166 dead. This, without doubt, is a set-back in improving Pakistani-Indian ties.

One of the main economic challenges facing the country is to close the gap that has opened with China. India needs trillions of dollars in domestic and foreign investments to improve its vast infrastructure. At present the majority of India’s inhabitants live in the countryside which hinders economic growth. That’s the reason for the need to build smart cities with modern “corridors” connecting them. Not only the French, Germans, but also the Japanese can help. Japan is highly rated for its technological prowess in India. I noted that the roads we travelled on between cities were new and well-constructed.

Alongside with modernization India is finally grappling its polluted city air. Delhi is rated as having the worst air in the world while there are regular shortages of electric power. Solar energy can come to the rescue (I must admit, that I did not see one house with solar panels on its roof) in this vast country of unlimited sunshine. During Obama’s visit it was agreed that America would help in this regard with its advancedd technology.

Modernisation will lay the foundations for more rapid development in India. But already now there are several sectors where India is a global leader. One of these is a service provider of information technology to companies in almost the whole world. We visited “Infosys”, the third largest Indian IT service company, founded in 1981. From a small firm it has grown into an employer of almost 170.000 people spanning the globe.

Like “Google” in the USA “Infosys” has built an entire modern township for the working needs of its employers, including for recreation and leisure. Its main office is in Bengaluru in a dedicated part called “Electronics City” which is India’s IT centre. Here, in an area of 1.3 sq.km., leading companies from India and the world have established their premises. For example, next to “Infosys” you have “Hewlett-Packard” and “Siemens”. One of India’s giants “HCL Technologies Ltd”, may in the near future establish it office in Riga, and from here service not only the Baltic states, but also a wider area including Poland and Russia.

In addition the space industry can also be viewed as a world leader. The Indian Space Research Organisation is also situated in Bengaluru and we had the privilege of meeting its director Dr. M. Annadurai and shown a “clean room” where satelites are assembled.

Today India’s economy is the tenth largest in the world, but it will not take long before it reaches seventh place. And, as previously stated, the forecast is that by 2030 it will be the world’s third largest. Hence it is imperative that already today we should seek various avenues of cooperation with this Asian giant and strengthen our economic and political ties. The establishment of the Latvian embassy this year in Delhi and the widening of the honorary consular network is thereby to be applauded.

India has to overcome huge challenges in order to reach the goals it has set for itself. Solutions have to be found in energy supply, communications and infrastructure. Even though India is an IT superpower, Latvia has surpassed it in internet development – Latvia already has 4G while India still has 3G.

One of the biggest challenges is the huge population size and the disproportional number of people living in the countryside. Despite this India is thinking of becoming the biggest nation in the world! I forwarded the question – how do you intend to solve the unemployment problem in a modern society if you want to increase the size of the population? Especially at a time when modern technologies are replacing people at work places at an ever faster pace. In order to promote economic growth, one has to concentrate on the introduction of the most up-to-date technologies in industry and agriculture rather than population increase.

Can India achieve what China has achieved? Is meritocracy better than democracy as China claims? It seems to me that this is not just a question about these two giant Asian countries, but a much a broader question about democracy and authoritarianism in our new century.