On November 4, this year, a ceremony of the US Marine Corps was held in Riga, where I was called to speak – as a Parliamentarian and as a former USMC member. Below I offer you my speech. 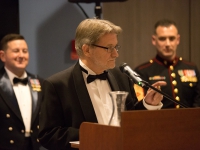 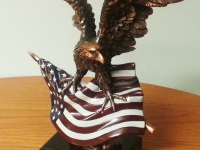 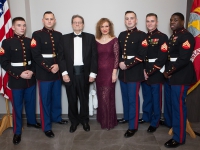 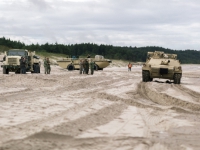 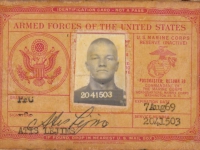 I celebrated my 21st birthday in the USMC boot camp in San Diego. In 1963.

I gave myself a break.  Tired as I was I managed to get up from my bunk and make my way during the dead of night to the shower barracks where I treated myself to a long and enormously gratifying drink of water from the tap.

How did I end up in the Marine Corps after arriving in America three years earlier from Australia?

Back then the Vietnam war was heating up and I was advised to join the reserves before I began my studies at UCLA.

There I was, a forlorn young man wondering around the sunny streets of Pasadena when I spied across the street a sign that said: USMC Recruitment Center. No line.

I was hardly aware that such a fighting force existed. I slowly approached the building but before I could knock on the door a smartly dressed man in uniform came out to shake my hand and offer me coffee.

Before I knew it I was filling out a a questioneer where you had to tick off boxes. After my second cup the Marine officer returned waving the test sheets in his hand and praising me no end – he said, all you have to do now is sign along the dotted line. And then I found myself in San Diego.

Maybe you have to be a Marine to really appreciate the pride and joy of graduation day after three months of very, very tough training with no let-up except Sunday afternoons when your friends and relatives could visit you and then only after the first month.

I understood very quickly that this was the training needed to survive in war and win it. Not all made it to graduation day.

Maybe this helped me in Afghanistan when I joined up with the mujahedin fighting the invading Soviet forces. My personal mission was to rescue Baltic prisoners of war held captive by the freedom fighters. I was over forty with a lame leg to boot and witnessed a massive Soviet combined air and ground attack on Surhab canyon controlled by the mujahedin where I had stayed the previous day.

It was like watching world war two documentary footage only now it wasn’t film: real cluster bombs fell from screeching fighter planes that exploded in quick succession on the mountain sides. The guerillas took pot shots at them with vintage anti-tank bazookas.

I was ferreted out of the pincer movement by a guide named Sofi whose only command of English was „Good boy”. It turned out to be a forced march that took 12 hours. We reached a raging river at night and after I lost my footage on the rocks at the bottom Sofi carried me across on his back. I stuck my parched tongue out to catch as many precious rain drops as possible, drinking water from the river would have killed me.

Many thoughts flited through my mind, guerrilla warfare in Latvia, our soldiers fighting in both big wars, but the image of one instructor from boot camp kept reoccurring: we were never asked what the problem was when we had reached the limits of what we thought we could endure: Instead sergeant Weisbach bellowed: Lejins, what SEEMS to be the problem!

Problems only appeared to be problems. I found refuge in a village controlled by the Afghan communist army and next day at dawn watched gun ships loaded with troops flying just fifty meters above our heads – like monster locusts swarming across the sky.

We were smack in the middle of two major battle fronts and the Afghan Communist army’s garrison was about 300 meters from where I was staying with Shahir, the commander of the local mujahedin unit.

You had to keep your cool and trust him that he knew what he was doing.

November 22, 1963 will for ever be etched in my mind. We were training at 29 Palms shooting down drones with our Hawk missiles when we all were unexpectedly summoned to the commanding officer.

Grim faced he informed us that our commander-in-chief, the President, had been shot and killed in Texas. The silence that suddenly descended upon the desert was immense. It took a while to comprehend this message and its implications. What were we, his troops, to do?

Political events took their course, Lyndon B. Johson did not mobilize us for the Vietnam war as expected in th summer of 1965. I was then attached to a Marine infantry company in Des Moines, Iowa.

The huge Soviet empire collapsed in three days.  It seemed only yesterday I was storming a beach on an island off the coast of California with my fellow marines when – would you believe it? – I saw on Latvian TV that the marines had landed in Ventspils!

The marines had joint exercises called Baltic Challenge with the Latvian army three years running in the 1990’s, that is, before we even joined NATO! Did you notice, they landed there again this Spring!

Of course, after Crimea military relations between the US and Latvia have been beefed up significantly and Summershield exercises now take place every year. NATO has, what is wonderfully called, a enhanced forward presence.

It goes without saying that the Latvian armed forces enjoy strong relations not only with the USMC, but also with the US Army, Air Force, Navy, and the Michigan National Guard. It is a privilege we treasure.

At the same time we see that throughout the world there are only in 7 or 8 countries where the American embassies have marines as their military attaches.

Latvia is one of them.

This gives a solid platform for Marine Corps activities in Latvia. Of course, cooperation between the USMC and Latvia is on the level of professional ethos, not size. After all, the Air Wing of the Marine Corps is bigger than the entire British Royal Air Force.

But when the marines come, they know that they have to get down to business on day one, there is no beating about the bush with the Latvian army!

In conclusion I cannot but say a few words about women in the armed services. They form up to 17/18% of personnel in the Latvian National Armed Forces and this is not by design. It’s the natural order of things.

Women got the right to vote with men in Latvia already in the Revolution of 1905, so it is fair to say we are the first in Europe who gave voting rights to women. True, the revolution  was brutally crushed, but when we did win our independence in 1918 it never  crossed anybody’s mind that voting would be restricted to men. Our constitution from the very beginning of our state simply states that all citizens have the right to vote. Period.

Three women were given Latvia’s highest military medal, Lāčplēša Ordenis in the Latvian War of Independence. One of them had assumed her dead brother’s identity in order to be on the firing line with a rifle. But even after her gender was discovered she was allowed to carry on!

Today we have two APC commanders who are women.

There is one thing that gives me pause, however. We have war songs that date back not only to the big wars in the previous century, but going back even to the Middle Ages.

It was always the women worrying about their men going off to battle, with the songs either sung by the departing menfolk ending with either: … don’t grieve, my darling, I will be back; if not, … a nightingale will sing forever above my grave.

I suppose new songs will originate in this century.

Finally I must say why there is an extra benefit to have a marine corps military attache in Riga.

Does it not enable us all to get together every year on the founding anniversaries of the Marine Corps, honor our fallen, and enjoy each other’s company!