I year ago I spoke about how new political and economic power centers were growing and changing the geopolitics of our planet.

I have drawn a map to illustrate this. The big question mark in the Strait of Hormuz is a new feature, to which I will return later.

Forecasts by US analysts a few years ago that after a few decades China will replace America as the world’s biggest economy and  India would come second could become a reality sooner than predicted. The USA would rank third. Europe was warned that if it didn’t get its act together, it might even drop out of fourth place.

Still, it must be remembered that we are talking about the gross GDP and not GDP per capita. Secondly, China needs at least 7% GDP growth each year in order to avert domestic unrest. China’s growth for this year is estimated to be only 8%.

I will highlight three points: The situation in Europe, Asia, and Iran. 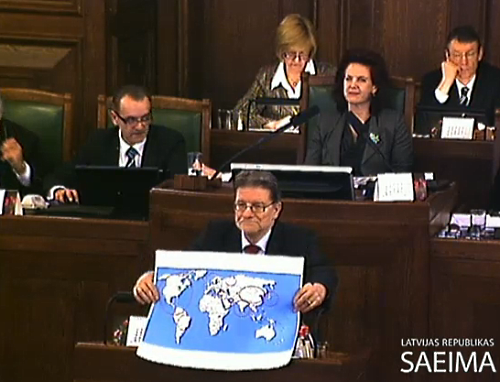 It appears that Europe is beginning to pull together. At least there is good news. What has happened? Suddenly the interest rate for bonds sold by states such as Italy and Spain have dropped to a normal level, i.e. around 5%, which is our level. The European Central Bank is copying the US Federal Reserve bank, in other words, lending money to EU member states’ banks for a very small sum with the silent understanding that they in turn will buy state bonds without asking for high yields. The markets have quitened down.

We in our turn have endorsed strict EU regulations for fiscal discipline at our European Affairs Committee meetings here in the Saeima. Nevertheless a loud political signal is needed on the EU inter-state level in order for the world and the markets to understand that Europe is getting its act together. This will happen in a few days with the agreement on the new fiscal compact in Brussels.

How has China reacted to the shift in the US strategy to increase its force presence in the huge Pacific region?

It appears that two signals have been sent. One – this is bad, the other – this is good, with the proviso that the USA should strive to rationally use its military power.

Let us step back to 2005 in order to compare Europe’s behavior with that of the USA in this region. At that time Chancellor Gerhard Schroeder, while visiting China, announced that he didn’t care what happened to Taiwan. But Japan and the USA had just agreed that they would defend Taiwan if it were to be attacked. Oil, that is imported by two US allies South Korea and Japan, is transported to these two states past Taiwan. This connection was not understood by the German chancellor.

But Europe acted equally impulsively when it decided to lift the arms embargo against China at that time. The embargo was put into effect after the massacre in Tiananmen square. The US raised objections, pointing out that the Europeans had forgotten that America was obliged to defend Taiwan.

The EU quickly backpedalled, and a Chinese commentator observed that the EU could not be taken seriously for another ten years.

How can such erratic behavior be explained? Simply – the EU lacks Asia watchers, analysts.

Giant oil tankers pass through the Malacca strait. In some parts its only a few kilometers wide. The economies of US allies are dependent on the safe passage of these tankers, as already mentioned. China also gets its oil by way of this strait. These states now try to lessen their dependence on Iranian oil, but the alternative oil sources are to be found from inside the same Hormuz Strait, i.e. Qater, United Arab Emirates, Kuweit and Saudi Arabia. And this strait can be closed.

Is war imminent? I would say the odds are 50 to 50. The story is known. Iran has threatened to close the Hormuz Strait if it has to face economic sanctions. The US has replied that in such a case it would retaliate with armed force. The 5th Fleet is stationed in Bahrein.

Iran is close to being able to build atomic weapons. It’s not only Israel that is afraid of them, but also the Arab states.

We can only hope that Israel will not unilaterally try to bomb the uranium enrichment sites in Iran. There are sharp differences of opinion in Israel over this issue.

A week ago General Martin Dempsey, chairman of the US Joint Chiefs of Staff visited Israel in an attempt to convice the government not to act unilaterally. The quarrel between America and Israel over this issue has broken out into the open. But what happens if Iran does not return to the negotiating table?

A few words about the reduction of US armed forces in Europe. An inadequate understanding of this has inspired totally uncalled for reactions, even here in Latvia. Two US rapid reaction brigades are to leave Germany, a total of some 10.000 soldiers.

What is coming in their place? The US anti-missile defence shield which, as recently pointed out by NATO general secretary Rasmussen, is an integral part of the US defence system.

What more can we ask? Does this testify that the US has lost interest in Europe? As if wealthy Germany could not put together two similar brigades thereby strengthening Europe and at the same time also enhancing NATO’s smart defence capabilities.

It is not enough that Europe pulls together on the fiscal and monetary level. Shifts in the world’s geopolitics demand that Europe must also put its house in order with regard to defence capabilities.