Last weekend I attended the European Interparliamentary Conference EURORES on renewable energy and energy efficiency. It took place in Helsinki (Finland) on 22 and 23 November and was organized in cooperation with the Energy Reform Group of the Finnish Parliament.

The key to energy efficiency today is to achieve carbon neutrality by 2050. However, at present, the European Commission, headed by its newly elected President Urzul von der Leien, wants to raise the bar and achieve CO2 emission reductions of up to 40% by 2030 from 1990 levels.

Today, we can no longer simply talk about climate change – the current situation must be seen as a climate crisis, because there is the potential to completely lose control of the planet’s climate. This is also evidenced by the great fires in the world, including my “second homeland” in Australia, where previously trees and bushes did not dry out between the rain periods; for example, Aborigines were able to burn tall grass in the spring, and trees were hardly affected. But now, thanks to the long periods of drought, trees have died and easily become flammable. Same in California.

I’ve written about this before, after attending a previous conference in Helsinki:
http://www.lejins.lv/2019/10/09/climate-change-challenges-for-Europe-and-world/
I also suggest watching a video clip from the aforementioned conference where, along with other delegates, I interviewed Richard Cory, Executive Director of the California Air Resources Council:
http://www.lejins.lv/2019/10/25/klimata-politikas-panakumi-kalifornija-video/

The global average temperature has increased since the beginning of industrialization, the ability of oceans to absorb CO2 has been reduced by 30%, and the process is continuing. Opposition lobbies claim that global warming is a “natural process”. However, the “human effect” is obvious, and, as a result, the human being will also be the main victim, that is, future generations of our children and grandchildren. It is good to see that young people themselves are now aware of the problem, are demonstrating, and are demanding change. Of course, this this will cost big money. But the technology is there!

The world is now increasingly focusing on the use of wind power, with offshore generators gradually outweighing those on the land.  Here there is a huge potential. Strangely, Germany is importing cheap coal from the US, where it is no longer needed (where cheap and cleaner shale gas is replacing it). Wind power must be developed in the Baltic states – the planned wind farm between Estonia and Latvia in the Baltic sea is a huge step in the right direction; there is  EU funding for such cooperation projects between countries. Latvia should develop a similar project with Lithuania in the Baltic sea.

Small modular nuclear reactors dug in the ground can also play an important role. Extensive research is currently underway with the Estonian company Fermi Energia in partnership with US-based General Electric and Japan’s Hitachi, who have agreed on a new transnational platform, GE Hitachi Nuclear Energy. Unfortunately, these reactors are very expensive, but they can be offset by high energy efficiency: small size, and little servicing needs. Any surplus could be exported to Finland, where there are deep storage facilities of granite rock.

Finland has now committed to achieving full carbon neutrality by 2035. I am skeptical about this, because there are two coal-fired power plants in Helsinki which must be phased out, but what will replace them?  In Latvia coal is hardly used at all; the biggest user is Cementex, which also burns waste. There will be a carbon tax on plants as stipulated by the new energy efficiency law.

It is imperative that waste must be sorted before it is burned, as in Denmark.  Copenhagen has a waste incinerator in its very center where the resulting energy is used for heating the city. The Finnish company Fortuna, which has a co-generation plant using wood pellets in Jelgava, also plans to focus on optimal waste incineration in the future.

The construction of energy efficient buildings is paramount to saving energy. For this purpose Latvia has managed to find money in the next budget to insulate Soviet-era buildings in the municipalities.

The controversial issue at the conference was the issue of energy efficiency in China: despite the widespread use of solar energy by the Chinese (and the production of these energy panels for Europe), China is also radically increasing the number of coal-fired power stations in the future. Unfortunately, Europe does not seem to have any leverage to influence China not to do so.

It should be noted that Putin’s big project with Germany – Nordstream 2 – is already obsolete. Achieving 2050 targets will also require radically reducing the consumption of gas as a raw material. What will happen to the gas grids after 30 – 40 years?  They could be used for transporting hydrogen, hydrogen must be thoroughly mixed with biogas as it otherwise cannot be transported in pipes. Where to get the need huge quantities of biogas? Scientists will need to solve this challenge.

It was fun to see how Finns enjoyed nightlife. I “gatecrashed” (I know a little Finnish) a Christmas party organized by Orion, a big pharmaceutical firm, in my own hotel devoted to the dress fashion of the 1920’s. I had very interesting discussions about the differences in pharmacy policies in Finland and Latvia.

Delegates had lunch at an interesting restaurant on the island in a cabin built around Napoleon. At that time, tar was stored in this building, as shipping has of course always been very important to the Finns. On the other hand, ammunition was stored there during World War II.

Next day during lunch we were offered Finnish music and very tasty sea food in an old wooden restaurant built during the Napoleanic wars and used as a storage depo for ammunition during World War Two. Thank you Finland! 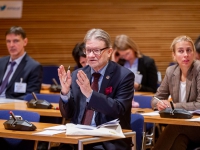 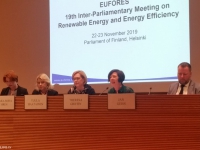 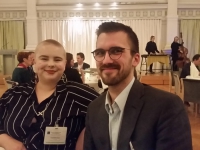 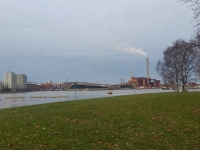 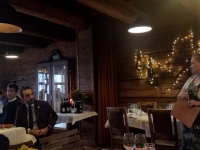 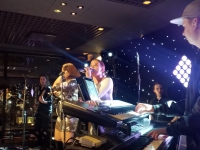